Todays question comes from Evie Bohn. I’m going to quote her email to me so I don’t mess it up.

“I love your books because they deal with real issues that women have. I’m kinda surprised though that you talk about fears and trauma around having sex in a romance book. I always thought that was a no no and I haven’t seen it in other books. Why or how did you decide to include these things? Do you think that people who play music as a profession have more problems with this than regular people?”

This is a question I’ve received more from authors than readers, so thanks for asking it, Evie. I chose the quote at the right because I believe this is the kind of love we all really seek. We want to find that person who will love us in spite of being imperfect, sometimes crazy, sometimes weird, or sometimes lost. It is really hard to find that person. Some people would say that person doesn’t exist. I don’t buy that. I think lots of those people exist. The problem is we never allow ourselves to be who we really are because we are so afraid that person is not lovable. My stories are about really good, kind, caring, lovable people who have something in their past they can’t accept for themselves and therefore don’t share with others. Yet, when they fall in love, they fear that if that person finds out about this aspect of their life they will walk away.

We all have these fears, whether it is something small like always refusing to dance because we’ve been told we look weird or something big like having a promiscuous past or being addicted to drugs or alcohol. And there is a lot in between. Every thing that happens in our life shapes how we feel about ourselves and how we are able, or unable, to trust that knowledge with someone else.

Now that we have the big picture out of the way, let me break it down a bit in order to answer more specific questions the best I can. 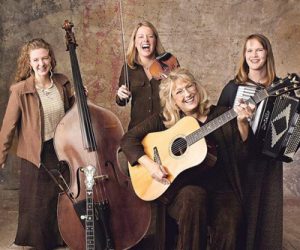 How the Series Idea Was Conceived

First, I’d like to address how I conceived this series. My husband is a musician (he plays guitar). He has been in rock bands with all guys, played solo sets with a blues vibe, traveled to folk and roots music festivals, and more recently (the last 6 years or so) he has been playing Folk and Americana music with one or two women as a duo or trio. So, I’ve been surrounded by music for a long time and at one time fancied myself as a singer and songwriter. I still write songs, but I rarely sing because it is something you need to practice to be good and I’m practicing writing instead. 🙂 In other words, writing a book about a band comes from my love of music and those who make it.

When we first moved to Oregon (about 18 years ago) I saw an all women Americana band named Misty River. I loved their music. I loved their camaraderie both on and off stage. Most of all I loved how they supported each other. It made me have some conversations with my husband and, eventually, with members of the Misty River band around the differences of life on the road for women versus men. The concept for writing a series about an all women band came from those conversations. Though it is VERY important for me to say that the characters in my book are NOT based on any person in the Misty River band.

To answer your questions about sex on the road. I don’t think that musicians, as a whole, are more promiscuous than the general population. I think we hear about it a lot more because they are celebrities. However, I DO think that musicians on the road have more offers of quick relationships than the general population. There are those people who fall in love/lust with musicians just because the music speaks to them. There are those people who believe that because people sing love songs, they are better or more considerate lovers. Because musicians are on the road a lot, they don’t have normal lives where they can date and get to know someone and build a relationship in the way most of us do. That does, sometimes, put them in a position of finding temporary relationships along the way. The reality is that most musicians are just like us. They want the same things and they have the same struggles. The difference is they live their life in the public eye and that magnifies everything.

The second part of your question was around why I make sex hard in these books instead of easy. This was a personal choice because I have a hard time reading romance novels that make it too easy to fall in bed or to fall in love. My own experience has not been that way and I suspect that is true of others as well. I know that millions of romance readers love to escape with a hunky hero who sweeps them off their feet and they have multiple scenes of great sex before they finally decide to get married. But a lot of people write those books and do it a lot better than I can. I’m interested in writing books that reflect experiences around the journey of finding yourself and loving yourself before marriage. Those experiences are more interesting to me. And I think that process is a difficult one.

In this series, in particular, I wanted to give people who have had traumatic experiences a book that showed how a character works through those experiences and still finds a  happily ever-after. When I started the first book, in 2012-2013, it was way before the #metoo movement and before women felt comfortable talking about past sexual trauma. It is true that finding my audience in the beginning was difficult; but it is growing now. Based on the reviews I think readers appreciate that it’s not easy and it makes them that much more happy when the protagonist finds the right person.

In Undertones I wanted to have a protagonist who has suffered primarily verbal abuse in a past relationship and how it shapes the way she sees herself and harmed her self-confidence. I see this happening a lot, particularly with younger people who are still so vulnerable in the way they approach love and sex and finding a life partner. The book is as much about Michele coming to realize she is much better, more beautiful, more talented than she believes for herself. It is also about her being able to trust someone else in her life. I think all of these themes are ones that almost very woman faces at some point in their love relationships. Sometimes those negative self-talk difficulties come from toxic friends. Sometimes from parents who wanted someone different (e.g., doctor, ballet dancer, teacher) than the child. And sometimes it is from a previous love relationship.

In Healing Notes I deal with the aftermath of rape. This was important to me because I know so many women who have been raped, both in my own family and many others. In the U.S. the statistics are that one in five women will be raped in their life time. That is darn scary. Fortunately, with all the reporting on this in the last few years, women are feeling more empowered to come forward and tell their story. However, there are still many who do not…many who suffer in silence. I wanted to show, through Rachel, how one person chose to deal with what happened to her and the struggle she faced to come to grips with it AND for other people close to her to come to grips with it.

In Heart Strings, I explore how one’s religious or cultural beliefs impact the way they conduct a dating relationship. Because Sarah is a devout Christian, she believes one should not have sex before marriage. This sometimes yields her playful ridicule among her bandmates. Even when someone believes this it doesn’t mean that keeping that promise is easy. It’s not. I had a good friend who had been divorced after 15 years and when she started dating again she made the decision, again, that she would not have sex before marriage. Many people questioned why this was so. It wasn’t like she was protecting her virginity. But it was a core belief for her and even though it was hard–particularly when she fell in love with an amazing man–her belief was still stronger than her desire. For Sarah, I added in another twist to make this more difficult–that is the man she falls for is the same man who betrayed her in high school. I believe that one’s cultural or religious beliefs are very important in a relationship. It is such a critical part of that person’s life that to give them up for someone else would be traumatic, and ill advised. It is important to show different ways that people make decisions about choosing a partner.

In Two Voices, due out the end of this year, I explore an issue that faces many women as they get older–and some when they are younger. That is illness that changes the way your body looks, works, or feels. I have many friends who have survived breast cancer. Surviving the illness is one thing, but surviving how you feel about yourself without breasts can be equally difficult. I have other friends who have had other types of cancers like colon cancer or other difficulties with their body that makes daily life challenging. People with fibromyalgia often don’t look different from you or I, but they struggle every day to have the energy they need to be engaged. So what happens to relationships when a woman faces these illness and challenges? That is the question Theresa faces in two voices. And when there are other family members, those choices can impact them as well.

Of course, in the end all of my women find their true love. But they have to struggle to get there, to trust, to allow someone else into such an intimate part of their lives. Just like most of us do. I believe in romance. I believe in true love. I believe in happily-ever-after. But I also believe it is not easy. Because it is such hard work, it makes the gaining of that all the more miraculous and beautiful.

How about you? Do you read romance for escape or do you appreciate a hard fought journey to find true love? Or maybe both?