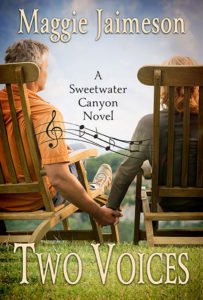 For all my Sweetwater Canyon fans, I thought I’d share a bit of the beginning of TWO VOICES. I am about at the half way mark in the book right now, so it is going to get done in time for a Fall release. Yay! If you’ve been reading the series, or just the story about THE HOGMANAY STRANGER, you’ll know the  backstory about Rachel’s dad (Gavin) in Scotland and Ian the homeless young man. They are both coming to America. Rachel’s father to stay and Ian just to see Kat graduate from high school and enjoy the summer until he returns to Scotland and college life. Note: This is unedited writing–meaning my editor hasn’t seen it yet. So please forgive typos, missed words, etc. Enjoy!

In this excerpt, Kat has been applying for a student Visa to study in Scotland. She’s been accepted at the Royal Conservatoire of Scotland in the Bachelor’s of Music program with an emphasis in Traditional Music Performance.

KAT LOOKED BACK at the visa application on her computer screen. Boy, they asked a lot of personal stuff. Was it this hard to get into the U.S. too? She worked through the next two sections and then electronically signed and hit the submit button.

She held her breath until she saw the confirmation message: Your application has been submitted, you will hear from us within three weeks. If you haven’t heard from us… then a whole bunch of stuff about who to contact, what to have ready, and even phone numbers to call. She hoped she’d not have to figure out how to do all that. Her letter of acceptance said it was really pretty straightforward and it was rare that an accepted student was unable to get a visa.

“All done?” her mother asked as she entered the kitchen.

Kat nodded, unable to say anything. It was such a big step—leaving home, being on her own in a foreign country. Well, not completely on her own. There would be Ian. She smiled again then quickly got up from the counter and closed her computer.

“I’m going to call Rachel and tell her the last step is done,” Kat said as she fished out her phone.

“Good idea.” Her mother gave her a big hug. “I’m so proud of you. You had this dream and you’ve followed it, getting everything in on time—even the audition by web conferencing. I don’t know how you weren’t quaking with nerves.”

“Actually, it was easier through the web conference because they weren’t ten feet away from me. The hardest part was picking what pieces I would play.”

“You are amazing!” Her mother hugged her again. “Okay, call Rachel. Don’t forget to ask if her father has finally got any word on his visa to come here.”

“Got it.” Kat automatically dialed Rachel’s number. Of all the members of the band, Rachel was the closest. If she could choose a big sister it would be Rachel.

“Just wanted to let you know the visa app is on it’s way to the powers that be in Scotland.”

“Wahoo! Congrats girl. They turn those around pretty quickly. I hear it’s only a couple weeks and you’ll know. I can’t imagine you’d be turned down. That is unless you mentioned something about all the thievery and drug running you’ve been doing.”

Kat laughed. “Nah, I didn’t think that was a good idea.”

“Don’t forget to ask after Gavin,” her mother reminded her sotto voce.

“Speaking of visas,” Kat said. “Has your father heard about his request to come live with you?”

“In fact he has. I heard from him this morning and he’s been approved. He’s thinking he’ll be here next month in time to see you graduate.”

“That’s amazing. Um…” Kat turned her back and walked a few feet away so her mom might not hear. “Is he coming…um…alone?”

Rachel laughed. “Of course Ian is coming with him. He’ll be out of his first year of college. You know, in the year since the fire, Ian has been like a son to my da, helping to clean up and keeping his spirits up. I already think of him like a baby brother. I’m guessing your excited to see him.”

“Noooo.” Kat drew out the word like a question with what she hoped was a hint of a don’t-tell-her-either command.

“I see,” Rachel said quickly. “You know she’ll find out. She always does.”

“Fine, as long as it’s in September,” Kat said. “Then it will be too late for me to hear the lecture.”

Her mother came up behind her. She mouthed: Well?

“Mom’s already asking questions, gotta go. So happy about your dad coming. Talk to you soon.” Kat swiped the phone off and turned to her mom. “Rachel’s dad got his visa application accepted and he’s coming in June. She thinks he’ll be here in time for my graduation.”

“That’s wonderful,” her mom said. “What else were you talking about? What lecture was Rachel going to give you?”

“Gavin, of course! Who else would we be talking about.”

Her mother’s face turned pink. “No…of course not.” She suddenly busied herself in the kitchen, emptying the dishwasher. “I just know how much Rachel wants him here and I think she would be good for him. I’m sure it’s been rough for him this past year with losing his home, all his belongings, and all his memories of his wife.” She shook her head. “I can’t begin to imagine what that was like. We saw the devastation, but then he whisked us back to the airport so fast I hardly had a chance to tell him how sorry I was.”

Her mom shook herself, like she was lost in thought. “And of course, he’ll want to spend more time getting to know his granddaughter,” she said.

“Your changing the subject, mom. You think Gavin is handsome, right?” Kat asked.

“It doesn’t matter if I think he’s handsome or not. I have no interest in dating him or any other man. You know that.”

“Blah, blah, blah,” Kat said. “Now it’s back to the old saw about my father leaving you high and dry with a two-year-old and you didn’t have time to date and now you don’t care. Well I don’t believe you one bit.”

Her mother stopped and stood straight. “Well, it’s true, he did leave us. You know that.”

“I do know that is true,” Kat acknowledged. “But the no dating thing is crazy. Especially now that I’m an adult and you don’t have to protect me from any scary men in your life.”

“I’m just asking you to think about Gavin,” Kat said. “I think Rachel’s dad could change your mind. Your beautiful. He’s handsome. You both love music; your close in age, and…you know…” Kat suggested . “I think you liked him when we went to Scotland and now that he’s here and you’ll see him a lot more…well you should just think about it. I mean that’s why you wanted me to ask about him. Right?”

Her mom let out a big sigh and took Kat’s hands in hers. “I know you think everyone should be paired up, and that I’m going to be alone without you. But the world isn’t always the way you want it to be. Not every person lives a life like a romance novel or a hallmark movie.”

“Then why were you so keen on me asking when he’s coming, if you don’t like him?” Kat asked.

“I didn’t say I don’t like him. I simply said I don’t want to date him. Really, Kat. Sometimes you are so exasperating with all your romantic pairings. I wanted to know only because I know Rachel is looking forward to having him here.”

Kat bit her lower lip. “You will be alone without me,” she said. “And I worry about that. I want you to have someone to love. Someone to hug. Someone to greet you in the morning and the evening like I do. If I knew you had someone like that, I wouldn’t have to worry about you all the time.”

“Oh honey,” her mom patted her hand. “You don’t need to worry about me. I do have someone like that. Rachel and Michele are always here for me. I won’t be alone all the time. There is no need for you to worry.”

“There is no but about it. We’ve been through this before. I’m perfectly satisfied with it just being me. Just think of all the time I’ll have with you gone. I can do anything I want. I don’t have to chase after you, remind you to get things done, yell at you about cleaning your room or doing the laundry. Sounds like heaven to me.” She smiled.

Kat withdrew her hands. “Okay. Okay. I give up. Unlike the rest of the world you want to be an old cat lady instead of a queen with someone who loves you so much they’ll do anything you ask.”

“Well, someone has to take care of the three cats,” her mother said. “I don’t think that Belle, Earl, and Doc would do well fending for themselves. We’ve spoiled them.”

“But maybe Gavin would treat you like a queen,” Kat tried again.

“Honey, I’m too old to be anyone’s queen. Honestly, I don’t want that kind of relationship where someone is waiting on me hand and foot. I just want to live an honest life being who I am and not worry about meeting anyone’s expectations except my own.”

Kat’s phone pinged. She looked down. “Gotta take this.”

“Just a friend.” She started toward her room, already texting back.

“Kat?” Her mother walked in front to block her path.

Kat typed in a quick response. Talk to you in a minute. And sent it.

“Geez, mom. I’m eighteen. I can have a couple of private moments, can’t I?”

Her mom raised a brow. “Of course you can, but when you purposely walk away from me I know you are trying to hide something. That means you are corresponding with someone you know I’ll disapprove of.”

Kat let out a breath. “It’s Ian, okay? You know the guy who saved my life in Scotland when Gavin’s Inn burned down. You approve of him don’t you?”

“Okay then. I have to answer him. Gotta go.”

This time Kat ran to her bedroom and closed the door.

Sorry about that, she texted. It’s mom being nosy. I hear u r coming out for the summer.

Yeah. Can’t wait to c u. Ian texted back. Did you remember to get in your visa app?

Schools out 17 May. Gavin said our flight is 1 June.

I’m not done until June 5th, Kat texted. I think graduation is the 15th but they haven’t officially posted it yet. <big sigh>

Glad I can see you graduate, Ian texted.

How are we going to get around your mom all summer?

It will be better when we’re both back here in college.

Kat smiled and texted, Me too. Then she closed her phone.

She walked toward the kitchen and smelled the garlic in the spaghetti sauce her mom made. Her stomach grumbled. “Smells soooo good, mom. Any chance we get garlic bread too?”

Her mom opened the oven and produced a plate of warm garlic bread with just the right amount of toastiness. “Ask and you shall receive.”

Kat quickly grabbed a piece and took a big bite, savoring the taste. “Mmm…mmm. This is heaven,” she said between chews.

“Be sure to get a serving of salad with your spaghetti and bread.”

Kat grabbed a plate and served up a good helping of salad and spaghetti. “You’re the best, mom. Are you sure you don’t want to come to Glasgow with me and cook for me and whoever else is in my dorm?”

Her mom laughed. “As amazing as that sounds, I think I’ll pass.”