I’ve had some of my readers happy to follow me into my new series of Science Fiction Romance, while others seem to be grieving no more Sweetwater Canyon novels. A couple of readers have written me personally and said something like: “Why science fiction romance. No one wants to read that. It’s all sciency and complicated.”

First, let me say that there is one more book in the Sweetwater Canyon series due out in Fall. But that will be it for regular releases. I may come back to it with holiday novellas but I don’t plan to continue the series for more than seven planned titles.

What’s the Same and What’s Different?

Second, no matter what genre I’m writing in, the story still has the same things you’ve loved in my contemporary romance, in my fantasy novels, and in my romantic suspense. That is people making heroic choices one messy moment at a time. That is my core story and always will be. I write character-driven stories of people trying to do the best they can and become the best person they can be under difficult circumstances.

So why start writing “that science fiction stuff” when I was doing perfectly well in “regular” romance? It’s a rather complex answer. So stick with me here.

Some of you know that the first writing I did as an adult was IN science fiction. I started writing SF short stories in the 1980’s. I’ve had stories published in many SF paper and online magazines throughout the past 35 years, as well as a variety of fiction anthologies. I’ve always loved SF as a genre because, for me, I see it as the genre of possibilities that may still come true. I loved Star Trek and the mostly positive universe it portrayed–one where humanity had learned not only how to go to the stars, but how to make peace among many alien races. As I progressed through college–learning both how the natural world and universe worked, as well as how people tick–I could really believe in that Star Trek idea and be hopeful we could find a way to save our Earth and still go to the stars.

I began writing romance when I started writing novels, instead of short stories. Part of that was my age. I was 50 when I began writing novels and I feared the “new” science for SF had long passed me by. Cyberpunk was becoming popular and, in spite of my computer background, didn’t appeal to me. I was drawn to big ideas that happened because of individuals and community efforts–not robots or aliens or superheroes coming to save us. I wanted human agency in saving humanity or the world or the universe.

Many of my SF friends were leaving SF in the late 1990s and moving to romance. These were people who had always written character-driven SF anyway. They suggested I should write romance because that was what was selling. I had read some romance as a teen and young adult–mostly my mother’s Harlequins and Silhouette novels. As I became a career woman, they didn’t appeal to me. They were too easy. Love was too easy and nothing really bad happened to people. It was completely different from my personal experience of the world where sometimes we struggled to put food on the table, where people were divorced and not living happily after, and where bad things happened to good people.

So, when I started writing romance, I wrote about challenges and how jumping into lust without love wasn’t very satisfying, and how people who’d been traumatized in relationships had to work hard to make love work for them. In other words, not your typical easy romance with a meet cute, some minor misunderstandings, makeup and live happily ever after. A lot of people don’t like my romance books because of that. But other people absolutely love them because of that. So, it worked out. I wrote what I wanted to read and fortunately, a few other people wanted to read them too. 🙂

Honestly, I struggled with that first romance novel. Focusing on the people and the relationships was so much harder than talking about cool futuristic technology and galaxy-spanning ideals. But then I realized that humans are humans no matter what time they live in–historical, present, or future. And as long as I stuck with MY experience of love, relationships, family, loss and triumph I’d be fine.

As I approached turning 60, our children started having children of their own. I thought a lot about grandchildren and what kind of world they were inheriting. I turned to Fantasy because I wanted a way to explore the complications of coming of age in a time where it seems EVERYONE is different. When I grew up, in my childlike eyes, everyone was more the same than different–at least that is what I was taught to believe. But now it is the opposite. Differences are held up as either good or bad. Some people are considered less than others because of certain differences. Or some have more expectations thrust upon them because of certain differences. I needed to explore how children grow into adults embracing differences as a gift instead of a curse and that was the basis of the Chameleon, Camryn, and the Forest People stories.

I know many of you have read both the Sweetwater Canyon series and the Forest People series. And you’ve recognized that they are still character-driven stories and people, even though they have fantastical powers, are still trying to make it in their complicated lives. They are trying to make the right choices, and become the best person they can be. And for those who love romance, there is a romance there too–but a more chaste romance as my hero and heroine are quite young. You see, it seems I can no longer write a book without romance or without the importance of connection between people–community. That’s because I truly believe we survive in community, not alone.

In 2018 I was becoming more and more frustrated with the state of our world–one where people are divided, eager to hate each other and angry with their state in life. A world where politicians–not just ours but around the world–were making dangerous choices. Choosing to do whatever is needed to be “the best,” “the strongest,” “the first,” “the greatest.” When one chooses to do that it is always at the peril of another person, group, country because the concept only allows for ONE best.

That goes against all I believe in. I believe that we thrive when we help each other. I believe in the adage that a “rising tide lifts all boats.” That has always been the way I’ve run my life. I share with others. When I started having some success as a writer, I helped new writers. When I was in academia, I helped others to come into the field and was truly happy when they did better than me. Even when I’ve had little money, I’ve always put aside something to help others. That’s because I believe that when any one of us is successful it CAN help all others to also succeed–maybe not in the same amount or to the same degree, but it helps. I don’t have to put someone else down for me to be lifted up.

All those thoughts made me want to return to the science fiction world–a future world where I could still hold onto hope where as in the present world, the real world, I do lose hope some days. But even in writing science fiction, I’m still focusing on the characters journey. I’m still telling the story of the difficult choices we make each day on a personal level and how sometimes those choices impact many people. And, of course, my stories still have romance and families that make those decisions even harder. Would you give up your child, your spouse, your country to save the world? If the answer is no, whose child is chosen to die? Whose spouse? Which country is the one you let be annihilated? These are the same choices our present world is making every day but no one cares to look to see them. 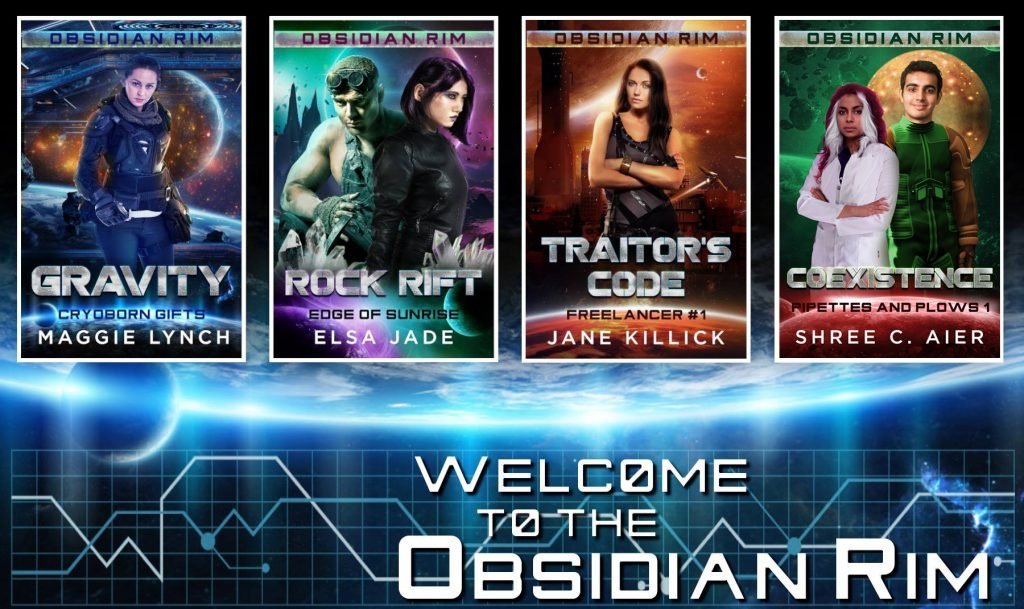 I’ve really enjoyed writing in this shared-world series. My book, GRAVITY, is the first in a trilogy about a special group of people called the Cryoborn. Cryoborn are those who were put into cryosleep as they shipped out from the inner galaxy to the rim. They have special talents. And in this series of three books I stick with one couple, their children, and the difficulty of managing a family in a starfaring world that is more like pioneers in space than an established universe like Star Trek Federation or even the Star Wars worlds with common enemies.

The other seven women writing in the series are all amazing, intelligent, kind, strong women. We all have different takes on what happens in the future. We all have different approaches to our stories, yet we recognize that they are intertwined just as the world is today. And it is those connections, that truth can be found. In finding the connections of those truths,  growth happens in ourselves and in our capacity as human beings to survive even the most heinous of circumstances. For me, writing stories of survival and overcoming all odds uplifts me and gives me hope.

I hope you will try at least one out, even if you aren’t a “regular” science fiction reader. You might just like it. You might find all the things you love about my contemporary romance, or my romantic suspense, or my fantasies are here too…because they really are. The only difference is it is writ large across a universe of adventure and connection.

If you have tried my first book, Gravity, let me know in the comments what you liked or didn’t like about it and I’ll send you the second book I write in this series for free as an Advanced Reader Copy (ARC) It will be available around the end of July, even though the book won’t be released until August. It will be as a thank you for giving me a try. That will be for the first 25 people who comment.

Excerpt from Chameleon: The Awakening