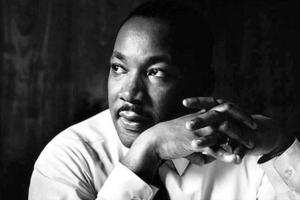 That quote, for me, describes why I continue to read the words of Martin Luther King, Jr. and all he stood for in his life. He was not a perfect man, but no one is. It is a rare person who continues to fight in the face of hate and danger. And I believe these words and many other speeches he made and words he wrote are just as meaningful and needed in this time—nearly 55 years following his assassination.

I don’t as much remember the march on Washington, when he gave the I Have A Dream speech in 1963, as I remember my feelings around the event. I was only 9 years old, but I had a deep connection to the struggle of poverty or being looked at as something less–something not as important. Having grown up in an integrated neighborhood with African Americans, Latinos, and new Polish immigrants along with those working class families, like mine, who had immigrated more than three generations ago I didn’t grasp that there was a problem of race elsewhere. As children, we all played together and shared our lives.

We went to a neighbor’s house who had a TV and watched the news report of this event in black and white. The I Have a Dream speech was delivered not only with passion but at a level that even a 9 year old could understand. He talked about things all of us wanted. I remember a couple of my African American friends sitting in front of the TV in awe because they’d never seen so many black people at once in our nations capital.

The years from 1963 to 1972 were my formative years, going from elementary school to graduating from high school. When I look back on the timeline of national events, I can see why I am so passionate about non-violence and about sustaining light and love in all of my interactions. Here is my timeline of those years.

I have a dream August 1963 – For the first time I realized not everyone is equal in other places around the U.S. Because I had only my neighborhood experience, I didn’t understand the wider picture.

President Kennedy assassination November 1963 – We were told about the assassination during school and I saw teachers crying. When I got home my father had tears in his eyes. I barely understood the job of a President of the United States, but knowing that someone that important could be killed was chilling. Seeing the outpouring of love from around the world was uplifting and gave me the beginnings of understanding the circle of life and death.

My five-year-old brother died from a heart condition in 1964—Though this was not a national event, my reaction was colored by the Kennedy assassination. It was as if all the world was dying and God was angry at us for how we were treating each other. I was very mad at God at this time that an innocent child could be taken. Later that year my cousin, also a young child died. It was not a good year. 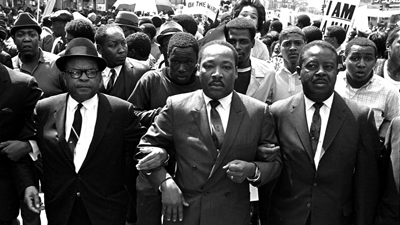 Selma to Montgomery March from Feb to March 1965—Again, on the news I see people being treated poorly by police—beatings, water canons, all because they wanted the right to vote. By then I realized what discrimination was and the world was different than my experience in my small neighborhood. Until then I didn’t realize there were places where black people couldn’t vote. I thought all adults could vote. I knew that the white people were the ones perpetrating the violence on these primarily black marchers. I didn’t really understand the concept of racism. I didn’t understand why people marching deserved to be beaten or killed. But some of the marchers were white people, and one in particular was also a minister who was killed immediately when clubbed on the head, James Reeb.  I realized it wasn’t just about being black or white. It was about getting what they wanted no matter who they had to hurt. It was like a two-year-old having a temper tantrum. Only these two-year-olds were armed with guns and sticks and gangs of people.

Watts Riots in LA August 1965 My father worked in L.A. for a trucking company. I remember him coming home and talking about the fires that had been nearby and then we watched it on the news. I feared for him going back to work the next day. I asked why it was happening. He said that people living in that area were very poor, couldn’t find jobs, and their housing was worse than ours. He said that sometimes when people have been downtrodden for a long time, and no one tries to help, that they lash out in violence. I heard the words, but I didn’t really understand. All I knew was that everyone was angry—everyone was hurting each other.

Bobby Kennedy assassination June 1968—A future president was killed, like his brother five years earlier. It seemed that hope of sanity in our world was gone. The news reported that Sirhan Sirhan, a Jordanian living in Palestine hated Kennedy because of his support of Israel. At age 14, I didn’t really take it all in. Why was the answer to people being different always to physically hurt them or kill them? How did that make a difference to whatever cause the person subscribed?

I enter high school that fall to sit-ins around the Vietnam War involvement and constant pictures on TV of people being killed.There seemed to be a huge disconnect between my experience of the world in my daily life and what was going on in the news. Maybe it was my way of living with what psychologist calls cognitive dissonance—the need to deal with two different realities in ones mind. In my case, my belief that most people are good and loving and if we continue to be that way all will be well, was in disagreement with the reality I saw reported on TV of most people being hateful and violent around the world and that the way to deal with that was to take extreme actions.

I solved that dissonance for myself by sticking to the belief I had in spite of what appeared to be evidence to the contrary. I was fortunate in that I had evidence that love can win in the end  because I saw how it worked in my own neighborhood. I saw it in my parents overcoming hardships of their own, trying to raise a large family on limited income and losing a son early in life. I saw it in the church I attended, in a minister who forgave me when I kicked him in the nose in anger at a God who would allow a five-year old innocent boy to die. I saw it in my extended family of aunts and uncles and grandparents. My grandparents took in foster children of all races throughout my growing up years. In fact, my grandmother loved that she had a “rainbow” family. All they cared is if the children needed a home and love. I am still in touch with many of those children today. 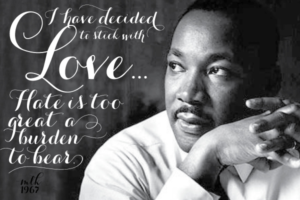 I still choose to follow Dr. King’s expressed belief that the only way we can live in a dissonant world is by choosing love. I know I can’t bear the burden of hate. I find that hate makes everything around me become filled with menace and fear. It weighs me down and doesn’t allow me to function. Whereas love brings light into dark places and lifts me up. When the outside news has been particularly bad it is love that gets me out of bed in the morning and allows me to move forward that day and to keep spreading what light I can in whatever way I can for that day. I am not under any illusion that MY love will change the world. But I do believe it can offer hope one person at a time and that, together, every person who embraces love instead of hate can change the world. I’m seeing it every day in small and big ways.

If you are interested in a great collection of Dr. King’s works, I can recommend this collection of his :Writings and Speeches That Changed the World. Here is an excerpt from the description: 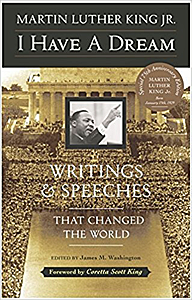 As Coretta Scott King says in her foreword, “This collection includes many of what I consider to be my husband’s most important writings and orations.” In addition to the famed keynote address of the 1963 march on Washington, the renowned civil rights leader’s most influential words included here are the “Letter from a Birmingham Jail,” the essay “Pilgrimage to Nonviolence,” and his last sermon, “I See the Promised Land,” preached the day before he was assassinated.

The book links are to Indiebound.org which will allow to look up your local bookstore that carries or can order the book. It is also available on most major online retailer sites.

I’m sure a number of people who read this blog are old enough to have experienced these events as well. Did it have the same impact on you as it did me? If you are too young to have experienced them, I’m sure you learned about them in school. Do you have any thoughts about how we can change the world for better instead of being a part of the conversation for hate? I’d love to hear from you.