Todays question comes from Randy. He says: “I’ve been following your blog and newsletters, and it seems you are concentrating on romance and fantasy right now. Though I enjoy your Chameleon fantasy books, I’m really a science fiction guy. I read Eternity: Virus Wars and really liked it. Do you plan more books in that world or any more SF in general?” 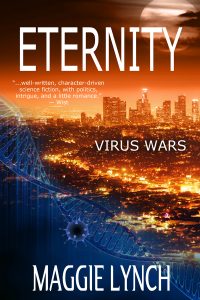 Thanks for writing in, Randy. This is a tough question. First, let me state that I am a science fiction girl. In fact, that is how I began writing fiction in the first place. I sold a number of SF short stories (about 45 of them) into magazines, a couple of newspapers and some online magazines. SF is definitely my first love. And Eternity: Virus Wars (a second edition of Eternity) was the first book I published as an indie author. The initial sales of that book was what convinced me to leave my small press publisher and go out on my own for all future books, no matter the genre.

Here’s the thing. Though I love science fiction, it doesn’t sell well. At least mine hasn’t. Maybe it’s because I’m not on trend. As books have moved more toward cybernetics, being “jumped into” digital feeds, and exploring those impacts, I haven’t stayed caught up in those worlds. Also, my interests have always been more about the human story of living in a different world (the fish out of water experience) than on the gadgetry. Also, it may not be selling well because that is the only novel I have out and people readers don’t like stand-alone novels, they prefer a series.

Though I would love to just write whatever I feel like, I’m dependent on my writing income to help pay the rent and put food on the table. So, that means I need to write more of what sells and not spend so much time on things that don’t. Thank goodness there are a lot of topics I like, ranging from romance to fantasy, as well as suspense and SF–or all of that combined. 🙂

There is a silver-lining here though, at least for me. I do have two more books planned in the Eternity series (yes I did plan it as a series). The next one sends characters up to Harmony Station, a very large space station orbiting earth, as they prepare to launch two generational ships–one for Proxima Centauri and another for Alpha Centauri. In that I explore what it takes to undertake that kind of journey and what infrastructure needs to be in place. How do you build that infrastructure? Who do you choose? What do people do to make sure they are on board. It is all politics, power, heroes and anti-heroes. How does the worker-bee person get treated and is it worth it to get off earth?

The third book is the launch of those two generational ships and how different they become as their leadership and their trajectories diverge. Then subsequent books, should the money be available, would follow those ships through generations likely with stops along the way to set up way stations and gather needed resources.

So, will this series happen? I have put on my schedule to write at least one book per year in this series just for me. Whether I actually have time to do it all depends on how other projects are working, what’s selling and how many people tell me they really want more in this world. If I don’t go to this series in 2019, I know it will be there waiting for me when the time is right.

I do have another plan though I’m looking at with other authors who love SF but equally love romance. If that project comes to fruition, it will be a multi-author project that is Science Fiction Romance (SFR), but with the emphasis equally on the science fiction and the romance. We will each write short novels in the same world (approx. 200-230 pages) so that we can release one a month without a problem and keep ravenous series readers satisfied. 🙂  With six authors writing two each that allows that to happen. I may be able to tie the Eternity world into that–but not sure as it’s still in the do-you-want-to-do-this stage. I am thinking these will not be the super sexy SFR books that are everywhere. They will be more SF adventure with a romance subplot. More along the lines of Lindsay Buroker, Jennifer Wells, or Catherine Asaro.

It is both a challenging time in publishing right now because of the huge numbers of people publishing, and a time with new opportunities at every turn. The key is deciding what I can spend time speculating on building–like a new series or new genre direction–vs staying with what I know works at this moment. Every author has to do a bit of both to have a career. I’m just still figuring out what that looks like for me.

So, readers, what do you think? Is SF Romance of any interest to you if it has equal parts SF and romance? Or are you a purist to one genre instead of a mashup? Would love to hear what you like or dislike about SF romance if you’ve read it.

Why Writing Retreats Are Necessary for Me