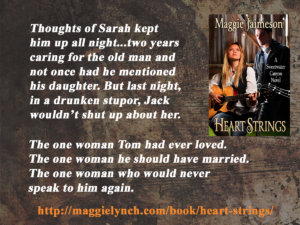 Every Thursday, I provide an excerpt form one of my books. This one relates to the quote in the image selected as a favorite by readers. The scene starts off the beginning of Heart Strings. It is from Tom’s point-of-view.

Tom Pawlak awoke with a jerk. Eyes wide, he peered through the shadows above his bed. Sunlight cast a bright haze through the barn slats. Unwilling to get up, he closed his eyes and rolled away from the light, scrunching the pillow beneath his head.

“Dammit!” He tossed the pillow aside and raised himself to sit on the edge of the bed. Thoughts of Sarah had kept him up all night. Why did Jack have to bring her up last night? He’d been here two years caring for the old man and not once had he mentioned his daughter. But last night, in a drunken stupor, Jack wouldn’t shut up about her. The one woman Tom had ever loved. The one woman he should have married.

The one woman who would never speak to him again.

He heard barking outside the door. He reached for his jeans and T-shirt and pulled them on quickly. The jeans were too loose these days. He grabbed his belt and pushed it through the worn loops, tightening it to the last hole. He’d lost about twenty pounds over the last few months. Working Jack’s farm along with a job in town had taken a toll on him. He needed a new pair of jeans. Ones that fit. But he didn’t even have time to shop.

The barking grew louder, more frantic. Then a man’s scream.

Tom rushed outside to find Kip, the border collie, running in circles and barking his head off. Billows of smoke poured out the front windows of the farmhouse.

Jack! He stripped off his shirt and doused it with water. Holding the T-shirt to his nose he threw open the screen door and scanned the living room. No flames. He pushed through the smoke, toward the kitchen. His heart slammed in his chest.

Flames had already climbed the curtains above the sink and were licking along the ceiling. The all-wood structure would go up quickly if he didn’t act.

“Jack!” He called as loud as he could between coughing spats. “Jack!” He listened for any sound of a voice.

Fire now engulfed the end wall and baseboards, immediately claiming cardboard boxes, newspaper and other flammable material along the way. Horrified, Tom pressed a hand to his mouth. In the smoky haze, he sprang toward the sink and turned the cold water on full force. The dog’s barking now joined with two other dogs outside.

Tom took the sprayer and pointed it at the flames. The water stream barely reached most of it. He had to get the garden hose. But where was Jack?

Wheezing, Tom rushed outside, located the hose and, with quick twists of his hand, cranked it on full blast. He jerked it free of the wheel and ran back into the house, uncoiling the entire length of hose behind him. He doused the living room and then made his way back to the kitchen, spraying until everything in sight was completely soaked. Then he went searching for Jack.

“Jack,” he called again, moving through the house and checking each room.

In the back bedroom a dresser had fallen over. He quickly pulled the dresser upright. Jack lay unmoving on the floor.

“Jack? Are you all right?” He kneeled next to him and pressed his hands against his neck checking for a pulse. It was strong. How did this happen? Why was Jack back here and the fire in the kitchen? For that matter why was he even out of bed?

“At six in the morning?”

“I don’t care what damn time it is. I needed a drink. I have a right to a drink don’t I? Don’t give me any back talk. I’m dying. I can have whatever I want.”

Tom chuckled with relief. Obviously Jack wasn’t hurt. “You’ve always had whatever you wanted, Jack. If you want to kill yourself, I’m not gonna to stop you. But you’re not taking me with you.” He squatted behind Jack, wrapped his arms around his chest. Then with one long pull, he lifted him to a standing position. “Can you stand on your own?” He slowly released his hold.

“What happened?” Tom scooted the dresser back against the wall. “How did the fire start?”

“I was lookin’ for my whisky. As I reached for it, my fat belly hit the stove and it turned on a burner. The flame caught my shirt. I took off my shirt and threw it on the stove. I turned off the burner, but by then my shirt was goin’ like gangbusters and it caught the curtain. So I grabbed the whiskey, came back here, closed the door, and prepared to die.”

Tom’s fists clenched. Yes, Jack was dying and it sure didn’t make him any nicer.

Jack opened his eyes and stared past Tom.

“It’s one thing you deciding to kill yourself. You made that decision when you kept drinking.” Tom pointed his finger at Jack. “But don’t make that decision for me. I’m not ready to die.”

Jack sighed long and loud. “Dammit, Tom. I can’t even die properly. What the hell am I supposed to do?”

“You’re going to take it like a man,” Tom snapped. “It’s not pretty and it’s only going to get worse, but I refuse to let you hurry it along by giving up and killing everyone else around you.”