What is Boxing Day?

Here is where I admit to my rube-ness. (Yes, it’s a word that describes me as showing all the signs of being a country bumpkin, which I’m not ashamed to admit I still am at my core).

Being American, Boxing Day is not something we celebrate or talk about. When I’ve heard my Canadian, European, or Australian friends mention it, all I knew was that it was a bank holiday or another shopping day (similar to Black Friday after Thanksgiving).  My assumption was the name derived from perhaps the 1940’s where you would box up all your decorations and gifts and put them away for the next year. Of course, that seemed silly to me considering I’m lucky if I have everything boxed up by New Year’s Day. 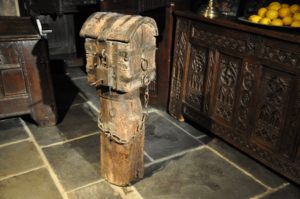 How wrong could I be? It turns out that Boxing Day is believed to be derived from a practice in the middle ages of giving to the poor via an Alms box, often near the church entry (narthex or vestibule), like the 15th Century oak and iron one pictured here at Roche Abbey.

However, there is evidence of giving via boxes even earlier–though not related to boxing day. Pope Innocent III, at the end of the twelfth century, allowed some mite boxes to be placed in churches so that the faithful people may at any time dispose their alms. As to how the money was used, I don’t know. Sometimes churches used these donations for maintenance rather than sending it to the poor.

Boxing Day was also traditionally the time that one would give a little extra to servants or other people who provided service. Wikipedia says: “In Britain, it was a custom for tradespeople to collect “Christmas boxes” of money or presents on the first weekday after Christmas as thanks for good service throughout the year. This custom is linked to an older British tradition: since they would have to wait on their masters on Christmas Day, the servants of the wealthy were allowed the next day to visit their families. The employers would give each servant a box to take home containing gifts, bonuses, and sometimes leftover food.”

I like the idea of boxing day being a time when you give of your riches to those less fortunate. Note that riches doesn’t necessarily mean wealth. In the 12th century, the poor would give a mite (sometimes known as a widows mite) which was a small coin of little worth or sometimes a small animal.  I also definitely like this concept of giving much more than yet another “discount” shopping day. 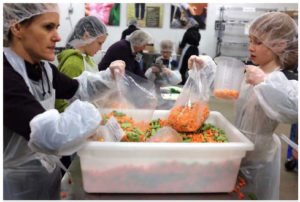 Here in the U.S. most small charities receive more than half their income during the winter holidays. The local food banks prepare “boxes” of food for the poor. They schedule the most people in the weeks following up to Christmas–both groups and individuals. That is in many ways like a traditional boxing day, though it occurs before December 26. It is sad to me that the only time the average person thinks of giving is at Christmas. However, it is certainly better than not giving at all.

If you celebrate Boxing Day, I’d love to hear if you have any special traditions surrounding this holiday. Or, if you were surprised to learn of its origin, I’d love to know I’m not the only one.