We Rise By Lifting Others 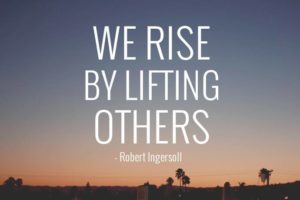 This is one of my favorite quotes. It is also a major tenet of the Windtree Press Author Cooperative. At Windtree Press it is specifically stated: “We are an author cooperative with the belief that good people, of like minds and career goals, can help each other to be better, to do better, and in cooperating will rise together.”

In today’s world, too many people seem to believe they have to tear someone else down in order to lift themselves up. I don’t believe that, and my personal experience is quite the opposite. One key to this phrase is to understand that it is something we do as a part of our core values. It is not just something we do because we “have to” nor something we do only when we need help.

Sometimes people see this phrase and equate it to the act of helping others financially or trading karma points. Though helping financially is one way we can help others rise, it only goes so far. In the end, it is helping people learn to succeed on their own that is most rewarding, and in doing so they can help others to succeed as well. As for Karma, the concept of Karma is not like a bank where each good dead is toted up and then you can withdraw good deeds toward you in equal amount. Instead Karma is the sum of all actions. I see it as energy that is put out into the world without knowing who will pick it up.

Consider, what happens when someone comes to a relationship with anger–shouting, not listening, insisting on their way only. Where does that energy go?  It is released and it remains in the room even when the expression of anger has ceased. Someone else entering that same room can still sense it—the energy is palpable. That energy is Karma. I ask myself, what kind of energy do I want to pass on to be picked up by other lives in ways I can’t even imagine? The answer is I want to pass on healing energy, positive energy, energy that helps people to move forward and spread light and acceptance to others.

The most successful people I know are the ones who reach out to friends and network with others–including those they don’t know personally. They do this even when they don’t need help themselves. In fact, they give back to their network long after they’ve “made it” or are very successfulI it would be easy to say: “I’ve done my part, I don’t need to do anymore. But they choose to continue to help.

I’m fortunate because many, many people have helped me to rise and continue to do so. In previous careers in counseling, software development, and education, experts offered their mentorship to me without any expectation that I could give them something useful. They did it because they knew that sharing with me would ultimately help them to support the mentoring system they believe in long after they are able to do it themselves. It’s worked! I have continued that tradition to help others coming up the ranks in those professions when I was in them.

In my author career, NYT and USA Today bestselling authors have offered their expertise to me in courses, in workshops, and sometimes by just answering a question I send them. People with expertise in marketing and formatting and managing the author career have taken their time to write books, share their wisdom, create classes so that others could come up behind them. They could have chosen not to tell anyone their “secrets” of success and hoped that by keeping us without knowledge they would compete and get their first. Instead, these authors believed that sharing would create more success and that would also lead to more success for themselves.

Some people believe our natural human nature is to compete and, in doing so destroy the competition. I believe that is the fate of animals in the wild who have no choice. However, the kill or be killed response does not have to be our response. We have the intelligence and the ability to create and live in a different system–a system where working in community with each other helps and protects all of us. It is in building alliances on those things we CAN agree on that we help each other and move forward.

For me, Windtree Press is one of those places where a diversity of authors, writing in different genres, have agreed to share knowledge, expertise, and help each other rise. Will we all become wealthy together? I doubt it, simply because each person is unique and has a different idea of what their success entails and what time they are willing to put toward it. However, we all have the opportunity to rise. Between the 20 of us is a lot of knowledge. Each of us has received mentoring from others outside the group as well as in the group, and we havce those experiences to share as well. A lot of people have gone before us and made the mistakes so we don’t have to. That is a great place to be.

How about you? Do you have an instance where people worked together to achieve something more than they could have achieved on their own? If so, please share it. It doesn’t have to be writing related. It can be any aspect of your life.

Things You Learn From a Dog