Excerpt from Chameleon: The Awakening 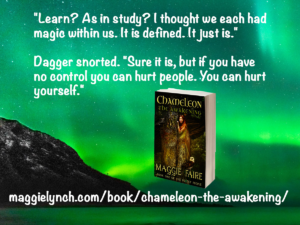 Again, it is Title Taste Thursday where a favorite quote is submitted by a reader. This particular quote comes from Chapter 12, about two-thirds through the book Chameleon: The Awakening. The excerpt below finds Camryn–the Chameleon–and Dagger, a Boha’a thief, trying to teach her about the powers she has and how to control them. Camryn has just completed the Kintala, a kind of coming-of-age initiation in the world of the Forest People. It leaves her pretty confused about what is true and what is not, who she can trust and who she cannot.

“Would you take me somewhere if I asked?”

Dagger swallowed. “You want to go back to Ohar, don’t you?”

Dagger looked away and expelled a big breath. “Before you can do that you need to learn how to wield your magic.”

“Learn? As in study? I thought we each had magic within us. It is defined. It just is.”

Dagger snorted. “Sure it is, but if you have no control you can hurt people. You can hurt yourself.”

“So is this about spells, and calling the four elements and making circles on the ground?” Camryn remembered reading about such things, but nothing in this world indicated anyone used that stuff. It was more fairy tale than the forest people. Oops. The forest people turned out to be true. She swallowed and cast her eyes down. How much more was there to learn to understand?

Dagger’s hand lightly touched her shoulder and she looked up into his eyes.

“All that stuff you mentioned. That’s ceremonial stuff. It isn’t really needed. It just provides focus. We use some of that to teach the children because their minds are always wandering. And lately…since the mutations started…when a mind wanders a tree can burn, or a house can blow up, or a boiling geyser can suddenly appear.”

“Not good,” Camryn said. She definitely didn’t want to cause any of those things. All she wanted to do was find her father and get him out of whatever prison the Mazikeen had fashioned for him.

“Right,” Daggered said. “And your powers are even more than a child’s. So, I can teach you some focus tools.”

Camryn wasn’t sure she wanted Dagger to teach her anything. Her last memory of him, during the Kintala, was not of someone in control and not of the kind of magic she wanted to learn.

She stepped away from him. He raised a brow in question.

“I’m not exactly comfortable with you,” she said.

He stepped forward. “I won’t hurt you.”

She stepped back another pace. “Don’t crowd me. Get out of my personal space.”

He stayed in place. “What happened? Something I did during the Kintala?”

“I’d rather not talk about it.”

“It may help if you do. I may be able to help you interpret it.”

“No.” She was not backing down on this. There was absolutely no way she would put into words what happened or how she felt. If he didn’t already know, there was definitely no way she was going to put any ideas into his head.

“Is there someone else who can teach me? Someone who is not a guy?” She worried her bottom lip. “I just think I’ll feel better with a girl right now.”

She sucked in a breath. “You knew she was with me in the Kintala?”

“I know a lot about my sister.” His jaw tightened and his eyes narrowed. “I know a lot of things about many of the forest people.”

Camryn took a step back. “How?”

He laughed. His seriousness turning to that devil-may-care attitude she thought he sported as a mask. “I am a Boha’a thief, remember? Thieves have all kinds of knowledge.”

She pushed at his shoulder, playfully. He grabbed her wrist and held it tight. “And I know about you, Camryn. I know more about you than you do about yourself.”

He released his hold on her wrist and stepped away, shaking his head. “It’s too dangerous. The place they are keeping your father is not safe. It’s not like here. It’s not part of the Redwoods. It’s cold. High on a mountain. You could easily freeze to death if you don’t accidentally slip and fall.”

“I don’t care. I have to go,” Camryn said. “I need to see him. I don’t know what I’m supposed to do as the Chameleon, but I know that it begins with freeing my father and learning more about my parents and their people.”

Dagger looked to the east and shook his head.

“Who? Ohar?” Dagger spit on the ground in disgust. “You expect him to tell you where the Mazikeen have imprisoned your father?”

Camryn rolled her eyes. “I’m not an idiot. Of course I’m not going to ask him. But I will find someone who knows. Maybe Abrani Daj.” She moved to seek the old woman.

Dagger moved in front of her. “No. Don’t go to Abrani.”

His face colored and he looked away. “Just. Don’t.”

Camryn paused. For the first time since she’d met Dagger, it seemed he was actually embarrassed. Something wasn’t right here. She stared.

“She’s…She’ll want you to…Look, just trust me. She is not the one who can help you in this. There are rules. Rules you don’t understand about what happens after the Kintala. Who you will be with next. Who you will…”

“What? What rules? Who I will be with? You mean I can’t be with Abrani Daj? Why not?”

“Ah, crzzl.” Dagger’s breath escaped with the swear word. “Look. Because you completed the Kintala here, it’s kind of like you’re now a part of the Boha’a tribe. That means Boha’a customs. Boha’a rules.”

Camryn squinted her eyes and looked to the side at him. “And that’s bad because?”

“Because the first man you see will be the one you engage with the balvan ceremony.” The words came out in a rush. “Not that I believe all that crzzl, but Abrani Daj does and if you go looking for her before you know it, we will be stuck in a tent with a guard until the deed is done.”

“Yeah. Until I’ve…you’re…well…until we have sex.”

Camryn yanked her arm away from his grasp. “What the hell? That’s barbaric. No one in the 21st century does that. I can’t believe it.” She paced as if walking it out would make it a lie. “Don’t even think it. There is absolutely no way in hell you and I are ever going to… ” she sputtered. “I don’t even want to kiss you. I don’t even want to be with you as a friend. I don’t even….”

Dagger guffawed, then he laughed so hard he held his stomach.

“Um, yeah it is.” His cheeks dimpled as he barely held back another chuckle.

He took a step toward her. “I wouldn’t mind … being with you, you know in that way.”

She refused to back up. He was just trying to unbalance her, confuse her. She raised her chin. “It’s never going to happen.”

He stepped closer again. “I wouldn’t mind kissing you either.”

She held her ground. “That’s not going to happen either.”

He stepped so close their lips were within inches of each other. “Don’t even think it,” she said between locked teeth.

Dagger slowly drew two fingers down from her temple and across her cheek.

She took in an involuntary breath.

His index finger sketched her closed lips. Not once, but twice. “I’m thinking it,” he whispered. “I’m definitely thinking it.”

Camryn swallowed. She was unable to move and unable to take her eyes from his.

After what seemed like several minutes, but was probably only seconds, she gathered her strength and said. “My father. Are you going to help me or not?”