How Do You Build a Fantasy World?

Cora has the question for today’s blog. Here are her words:

“I love your fantasy series with the Chameleon. You’ve built a unique world I’ve never seen before. It’s not like a lot of fantasy with vampires or mages or sword and sorcery. Yet it still has that flavor of epic fantasy. What made you come up with this world and how did you decide what that rules were for the Forest People and the magic?”

First, thank you for loving my Forest People series so far. You ask a really difficult question, and no two others approach world-building the same way. Some people build maps and draw pictures of the world first. Then they name all the characters and creatures, and they outline all the magic possibilities and the rules. I admire people who are that organized, but I admit that’s not me. 🙂 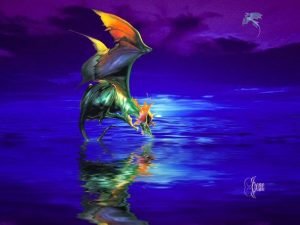 All of my books, whether fantasy, romance, science fiction, or suspense start with a particular character and a particular problem. In my novels in the contemporary world I usually have a good idea how to solve the problem and the settings I can use. In my Science Fiction or Fantasy novels, I know what has to happen internally or emotionally for the character to solve the problem. However, I don’t immediately know the settings I can use. That is where research begins to take over my life. The first step was gathering lots and lots of pictures that represented that world for me. I am not at all a visual person. I know art I like and graphics I like, but in daily life I don’t notice or pay attention to images. I pay attention to words and sound more. So, gathering pictures was critical for me. Otherwise, I would be writing lots of dialog and action but no one would ever know what the world looked like. For example, I did a lot of research on dragons and most mythology assigns specific powers or characteristics to certain dragon colors. Because Camryn’s powers are unique and part of her brief is to unite all the Forest People, I felt that her bonding with a dragon that was of a particular color didn’t match her story arc. So, I had to find a picture of a dragon with multiple colors. The one on the right was one of the first I found and has served me well. 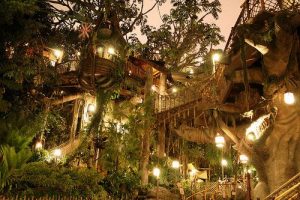 I gathered pictures of the different Forest People homes. As Camryn moved from her home to the medical facility and eventually to the Forest, I added more pictures to my board. For example the way I perceive the Boha’a village is more ramshackled and quickly put together like the picture on the left. Because they are wanderers. They don’t have a single home place. They need to pick up and move from place to place. On the other hand, the Mazikeen camp is more ethereal because they are somewhat ethereal beings–more like we might think of as angels. So, their homes are rounded and bright lights. I also assembled pictures of movie stars I would cast that I thought looked somewhat like my characters. Each time Camryn went to a new place, or met someone new or encountered a new creature, I thought in my mind what would work and then I stopped and gathered pictures that might depict those ideas. Once I could picture it, then I could describe it better. There are many times in the process of writing that I wish I had the ability to mind-meld with an artist, so she could take my thoughts directly from my brain and draw it. That has been the biggest challenge for me because I don’t think in pictures I think in words and their abstraction. Again, this is not necessarily how anyone else does this. 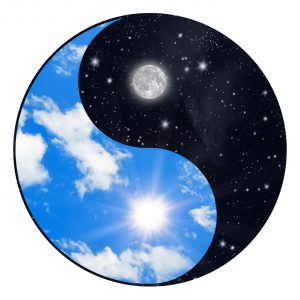 In the case of the Forest People, I had three seemingly competing ideas that I wanted to be a major part of the novel. The first, and overriding theme, is that any superpower (magic) a person uses always has consequences for its use. I believe that even when we do “good” there are unintended consequences. So, that led me to using the concepts of light and darkness and how we understand those concepts and wield them (magically or psychologically) to get what we need in life. This is not necessarily a new idea. Many books and movies employ the use of light and dark. What was important to me was that one was not bad and the other good. I don’t like the concept that dark is always bad and light is always good; or the angel/devil dichotomy. I personally believe that we all have both dark and light inside us and that it is the balance of those two forces that is the ultimate goal. Just as the night has its beauty so does the day. One is not evil and the other good. In fact, you need each to appreciate the other. This balance of light and dark and overcoming the traditional meanings of good and evil helps to generate plenty of conflict because being able to truly balance that is certainly a life-long pursuit, whether in today’s contemporary world or in a magical world. This also provides the primary goal for my heroine, Camryn. She has a lot of feelings, fears, and anger that she needs to understand. She also has a lot of love and loyalty that can get out of control as well. I’ve taken those types of feelings and made them an important part of her control of her powers.

Second, I wanted to use the tropes of mythology but not necessarily stick with them exactly. For a number of reasons, my high school and college education was notably devoid of any classes in mythology. Because I was initially geared toward science, I just didn’t make time for those classes. Not that I wasn’t interested. I was and still am. Fortunately, being a religious studies minor provided me with lots of foundational knowledge about good and evil and its push and pull in belief systems of various religions around the world. One of my favorite college classes as taught by a Jesuit priest and it was the study of good and evil in World War II. How and why average people, not the leaders, reacted and did what they did. It imbued in me the understanding that each of us has the power for good and evil and that we are challenged every day to choose, sometimes in very small decisions and other times with very large decisions. It was a class that changed my life and my understanding of the world 45 years ago and those concepts are a big part of Camryn’s maturity in the books as well.

Mythology is an extremely important part of our psychological development. Stories passed down from one generation to the next are often based in myths. On the one hand, for a writer who wants to build a different mythology that is great because I have no preconceived notions. On the other hand, it is a  huge handicap because many fantasy readers ARE steeped in mythology and they have certain expectations. So, I spent about four to six months reading a lot of different mythologies from as many diverse cultures as I could. I wanted to understand the commonalities among different cultural myths as well as the differences.

I knew my heroine was going to be moving around the world fairly easily, so it stood to reason that the mythological beasts and beliefs would also vary depending on where she was located. Students of mythology will see that the beasts and their characteristics, as well as some of the characteristics of the Forest People and their tribes are quite diverse as well. As much as possible, I’ve actually tried to stick with the ancient myths of native peoples in different parts of the world because I think those are the most powerful and have the longest oral history.

The third step was beginning to write. I am not an outliner until I get at least half way into the book. That’s because I like to stay with my characters and work with them as they tackle the problems in very human ways and then I come back later and fill in the background, the settings, the myths as needed to support those characters and their journey. As I make things up along the way–which really is what I’m doing–I take a lot of notes so I remember what rule I just set. I often go back to my research notes as well to see how an ancient culture may have thought about those rules or wielded their own magic or science.

I hope this helps to answer your question, Cora. As I said in the beginning, it is not an easy process. You should ask this question of other fantasy writers as well. I’ll bet you will get as many different answers as their are writers. 🙂

Lets Connect!. Follow me on your favorite social media sites
0

What kind of research did you do for Rachel's fiddle playing?

Why Writing Retreats Are Necessary for Me