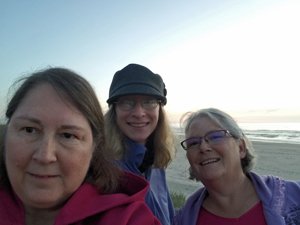 I was on my writing retreat at the Oregon Coast Sept 16-21 with the specific goal of finishing Chameleon: The Summoning. I am happy to report I finished the manuscript a day early. Had the last day to read it through on a first editing pass.  I celebrated with my writing friends there with me and thoroughly enjoyed my last sunset until I return in 2019. All the other people at the retreat were there to finish books as well and we all did!!! It’s the only retreat I’ve done with my friends when ALL of us finished a book.

Then I was up at 6am the next day, early enough to also see the sunrise–a rare occurrence for this night owl. Of course, I wasn’t finished finished–meaning I still had to read through it again before sending it to my editor. But I felt good about the story as a whole–well as good as I ever do when I’ve finished a book that kicked my butt with every chapter. 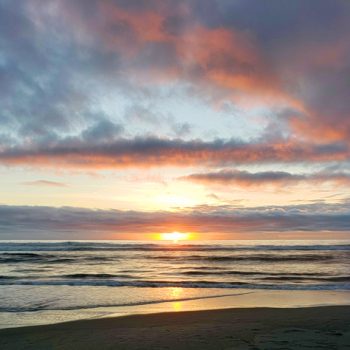 The first two books in this series were the type that wrote themselves. I conceived of those two books as a whole and wrote them back-to-back without a break in between. I had summaries for five other books in the series. The plan was to do them in two parts. The first three which follows the protagonist as she comes into her full powers as an inter-dimensional being and the prophesied Chosen One to save the world of the Forest People. The second set of four books details the war between the tribes of Forest People, and then the big war between the Agnoses and the Forest People.

After the first two books coming so quickly to me, I had an expectation of the same for this third book. After all, I knew exactly what had to happen. I knew the world and the powers and the rules. Instead, by the second chapter it had me digging in my heels like a child afraid there was a boogeyman in my bedroom. Who knew that would be so hard? How to successfully  tie up the trilogy and creating large-scope magical events that demonstrated the huge interplay of spirituality, magic, responsibility for good and evil, and the difficulties of a seventeen year old wielding enough power to undertake that task. Think Harry Potter not to sure he could successfully take on Valdemort. He was ready to give his life, but what if he took everyone else down with him too? Now mix that with the scope of Gandalf, in Lord of the Rings, who commanded magical armies in the final book, but was often rather opaque about his knowledge or his powers–at least to the young Frodo. Throw in a bit of modern teenage angst and a yoda-type mentor in Abrani Daj, and you get the picture of what was in my head that could only be accomplished on the big screen with lots of visual effects. I’ve been spoiled by big-budget fantasy movies and it’s hard to imagine writing something that will compete. The problem for me was how to possibly portray that big magic in the written word. 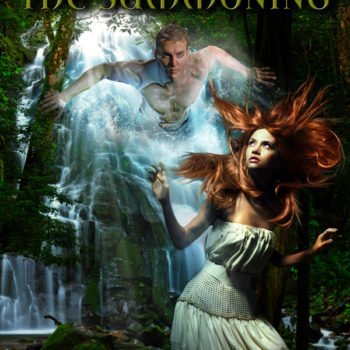 Go ahead and laugh at my hubris. I have laughed at myself many times in the past year for setting such a high bar I couldn’t possibly achieve. I was writing a novel, not a screenplay. Yet, those were the pictures in my mind placed into the world I had created for the Chameleon books. Over my twenty titles that have been published, I’ve learned that when a book is such a struggle for me, it means there are important writing lessons to be learned. My lesson for this one was twofold: 1) Even if I’m a “pantser” at heart, sometimes the best way to get past fear, or being overwhelmed by the story, is to articulate the structure on paper and plot the major beats for the scenes that are so overwhelming to write.  2) The magic in a fantasy world needs a basis–an overriding purpose for the rules. I had established that in my mind from the beginning and it was choking me now. However, a writer can break the rules if you have a unique character or a world-changing situation. You just have to make the reason plausible.

I knew from the beginning that my protagonist was going to break the rules. Her parents love was taboo, and her subsequent birth was illegal. I also knew from the beginning that my magic was based on some of my own core spiritual beliefs about the balance of light and shadow, the importance of intentionality behind our actions, and the exploration/understanding of the unintended consequences of our actions –both good and bad–when we can only view the world from one narrow point of view. Mix all of that with a world gone crazy and I knew I had an explosive stew of people and events to somehow draw together within the framework of a seventeen year old female protagonist who was not raised in that magical world and still questioned who she really was and if it was enough.

You know, the usual every day challenge of “who am I now” being played out for all the universe to witness. 🙂 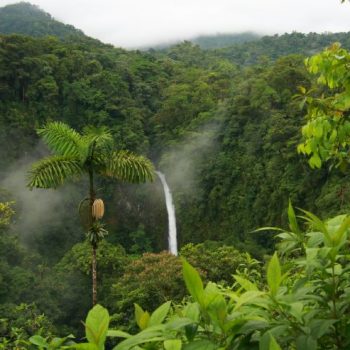 La Fortuna Falls in Costa Rica. This is where Camryn practices much of her integrational magic in the book as she works with the elemental spirits in the area.

Those were just the challenges of the arc of the story itself and getting that on the page. Since starting to write the book 18 months ago, In the real world my daily life had also become more challenging and offered several distractions to keep me from escaping into my fantasy world. We moved for the second time in two years, a variety of siblings and cousins moved into the area with need of my time, and a best friend was diagnosed with cancer (who lives 200 miles away) and I wanted to be by her side whenever possible. This past year, I often felt there was no space left in my consciousness to get everything done in the real world, which made it that much  more difficult to take on my fantasy world and give it shape and form to finish the trilogy.

As most writers will tell you, everyone faces these kind of challenges at some point in their life and some people face it daily or at multiple times over a several years. I am not at all unique in this, but I am the kind of person who mistakenly believes I can just keep going and magically stretch twenty-four hour days into thirty hours and seven day weeks into ten. I know it’s crazy. But I’m a writer. I make things up for a living.

I have friends with chronic pain who have days they can barely move, nevertheless think. I have other friends who in this past year have lost a child or a spouse and are doing the hard work of grieving. Many writers have returned to a day job as their financial situations changed–divorce, move, the market shift to be more densely competitive over the past two years. And some writers I know have decided they no longer wish to write and have quietly disappeared to take on other creative pursuits. I had none of those problems–ones that can end a career or put it on hold for more than a year without any books at all.

It is with all that knowledge that I admit to being ecstatic I made it through to the other end, that I didn’t give up, and that in my heart I am happy with how this book turned out. Whether my readers will be, I don’t know. For those who want escape, I believe it is in there. For those who want reflection and deeper thinking, I believe that is there too. The question is if the balance is enough to satisfy both sides. Or, in trying to achieve that balance have I satisfied no one but myself? We will see. No book satisfies everyone. I’m hoping my current fans will feel this is a good conclusion to the trilogy, but also want to pick up the next book(s) about the war to see if the Chameleon IS able to save the Forest People. And what about the Agnoses? Are they worth saving? If so, who will save them?

So, here’s my schedule. Incorporate revisions once it comes back from the editor. Then one more read through, and ARC release. Once it is finalizled, my audiobook narrator will get the manuscript–the wonderful Rachel Jacobs who narrated the first two books in the series. IF she can fit me into her schedule in October (that’s a big IF), I will put the book on pre-order while she is completing the narration, then we will simultaneously release the print book, the audiobook, and the ebook at the same time! I’m guessing that will be the end of October. IF she is too busy (because she’s an amazing narrator and has lots of work) I’ll go ahead and release the ebook and print book with the audiobook to come early in 2019.

Want to know exact release dates? Join Maggie’s Reader Group, a private Facebook for my readers. Don’t like the intimacy of private groups? Then come like my Facebook Maggie Lynch author page or follow my Twitter feed. Those are the places I always first announce ARC availabilities, new releases, discounted copies, or giveaways for short periods of time. For a less social, but equally informative option, join my email list. I send emails out about once per month to update my fans. It’s not quite as immediate as social media, but for those with very busy lives they may find it the best way to keep up.

I danced in the cabin at the coast last Friday. This week I’ve been home catching up on all the things I ignored while I was gone: checking narration for the Healing Notes audiobook, coordinating with my web designer for a new website about to golive, planning some great giveaways for October, and final edits for Chameleon: The Summoning. I have two more books I want to get out before the end of this year: Two Voices and Vanished. So, I better get back to writing.

Hmmm…I wonder if my husband will mind if I leave him for the next three months and stay at the beach? Probably not a great idea. I mean he’s super supportive whenever I go away. But last week he kept sending me pictures of the cats and telling me how much they missed me and they weren’t eating as well. Do you think that’s a hint? (big smile)

Happy Friday everyone! What do you have to celebrate this weekend?

Rockaway Beach in the morning. It’s tough to have the beach all to myself, but someone has to enjoy this.