Fall is Here and Change Is In The Air

As I write this, the official start of Autumn is only three days away. Fall is my favorite season of the year. I love the brisk mornings and evenings, the change of leaf colors to golds, browns, and oranges, and some even with red so dark it is near to purple. This season also begins the anticipation of the many fall and winter holiday events. Though we are still under COVID masking restrictions, the end of summer and continuing into fall has brought back opportunities for live music outside which means my husband is playing again and I love going to those events to hear not only his music, but so many other musicians in our area.

Fall also signals the time of taking account, analyzing what went well and what did not, and beginning to make plans for the next year. In order to that, I first need to come out of the cave I’ve put myself in for the past two to three years. I recently wrote about this for the Romancing the Genres Blog about change. If you are interested in how I finally made the turn, you can read it there: Stillness in the storm. Instead of rehashing that, I will tell you what changes I’m implementing in my writing career and why.

One thing that the continuing COVID lockdowns have made clear to me is that I was pushing too hard and trying to be all things to all people. I’ve always been a a helper or supporter of some kind, even when I was in management. That is a part of my DNA and has played into every career I’ve had–waitress, secretary, counselor, technical creator for learning, teacher, professor, dean, consultant. Even writing has been focused on that support of people –sharing stories that readers can relate to the characters and maybe see a little of themselves in it. My tagline was designed (after many years of thinking about the stories I wrote) to show that life isn’t easy…that we all make mistakes along the way. The effort to live a good life is heroic.–stories of making heroic choices one messy moment at a time.

Changing My Focus: Letting go of the past

Just as Fall brings unusual colors to my experience, I realized that I’d been stuck in a way of writing and genres that no longer spoke to me as clearly. In many ways, I’d become a part of the evergreen forest of my career, without taking time to notice there may be other very different or interesting colors for me to pursue.

My first romance was published by a small publisher in 2011. It was a romantic suspense, Expendable, that came out of my experience working at a health and sciences university and our oldest son serving his third tour in Iraq and my fears for him.  That was 10 years ago. The publisher didn’t do much with it and I got the rights back, changed the cover and updated the story a bit. Then I republished with Windtree Press in 2014. I’m still proud of that book. At the time I conceived of two more books in that series and had plans to put out one a year. I had story ideas, I already had the characters. I even had the covers designed. But other priorities took over in other series, as they sold more books: Sweetwater Canyon romantic women’s fiction series and my YA fantasy series, featuring a human chameleon. I’m a “completist” –meaning I will often continue a project not because I want to, but because I’ve promised to do so. I’d committed to myself that this was a trilogy, so I kept putting the other two books on my schedule even though I could not bring myself to make them a priority.

In this particular suspense series, over the last four years as politics became toxic and more and more violence occurred in our streets and in homes, I realized that I no longer have the stomach for writing violence. I don’t have the will to put my heart and head into that space where women are being harmed and people must go in with guns to save them. I’m not saying that isn’t real, because it is real. I’m not saying that we need those heroes to save each other–women and men.  There are other authors that do that well, I simply can’t go there anymore.

Consequently, I’m letting go of completing more books in that series.  It’s hard to let go of that as it was my first traditionally published novel. But it also is freeing to not have it hanging over my head, knowing that I am no longer able to write those books.

Deciding Which Series to Finish or Continue

I do still love Romantic Women’s Fiction. That means I will still finish Theresa’s story, Two Voices, in the Sweetwater Canyon series. And I will continue with a follow-on series that feature the children of all the women in the band. However, my pace will likely be one book per year. I may write a holiday book or a novella for a second offering, but no promises.

I also still love my SF stories. I began my fiction career writing SF short stories for magazines and anthologies and I still love the combination of thinking about a far future where we figure out some things, but still have our human failings that get in the way of progress, misuse technology, or simply provide new challenges in how we live with each other. SF, including SF romance, will always be a continuing love for me.

That means I will write the third story in the Obsidian Rim universe to finish the Cryoborn Gifts Trilogy with Singularity. I do have a plan for another trilogy with the children born in this series, but probably will not start it until 2023 or 2024. I need to rework my SF premise or that new series as the one I’d settled on has turned out not to be viable.

What I have decided in the past year is to begin writing Middle Grade fiction. This will be my primary focus in terms of priorities and I plan to write two books per year in this genre (maybe three depending on the publisher).  Those who subscribe to my email list and newsletters know that I announced this plan a while back and asked for my fans who might be interested in reading Middle Grade to let me know and I would send them an ARC when it was available.

So, why Middle Grade? As our oldest grandchild is now entering fourth grade, and my youngest niece (I’m the oldest of nine children) is entering sixth grade and middle school, I’ve seen the huge amount of growth that happens between those ages. I’d already focused on YA in my fantasy, remembering how much my world expanded in high school. But I’d forgotten how the foundations of identity, confidence, and learning to deal with emotions are forged between the ages of 8 and 12. Today, children of those ages are exposed to a lot more in the world than I was at that age. They are inundated with media (TV, social media, film) in a way that wasn’t available to me. It is a very important time in a child’s life and I feel called to speak to that time with characters and books.

When I first contemplated writing a fiction book a little over 40 years ago, I started one about the lives of six foster children living together in a home, coming to grips with their past, finding each of their own identities, and finding strength and confidence to create a successful future for themselves. This idea came out of my own experience having foster children in our extended family. My maternal grandparents took in nearly 100 foster children beginning from the time I was about 10 years old until my grandmother passed in her 70’s. A maternal aunt and uncle also took in foster children, serving more than 20 during their decade as foster parents. Getting to know these children, welcoming them into our extended family, and seeing their struggles and successes was a major part of forming the way I viewed the world and who I am as a person. I always wanted to tell their story. 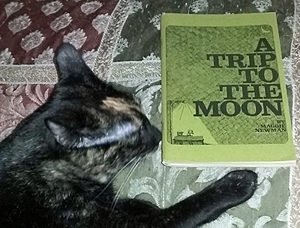 However, 40 years ago I wasn’t a seasoned writer. I did publish one children’s chapter book, A Trip to the Moon, through a university press in 1979. It is no longer in print. Other than that, my published fiction then consisted of a few science fiction short stories, and a few short essays in places like Reader’s Digest.

I struggled with writing the book I had in my head. I really didn’t have the knowledge, craft, or experience to do a good job of capturing the emotions or the lived experience of those foster children that I needed/wanted to create. I was 25-26 years old, I didn’t have children of my own. I also didn’t have a good point-of-view character, and I was writing too much of a kind of biography dressed up as fiction, instead of understanding how a fiction book could explicate a single story of one foster child. But it remained in the back of my mind. Our family still keeps in touch with about 30 of all the foster children that came through those two homes. These were the ones who stayed a long time, who grew up to adulthood while in foster care. They now have families, careers, and sometimes struggles of their own as adults.

Now, 40+ years later, I feel I’ve learned how to write stories and I have the craft to tackle this project. I’ve conceived it as a series where each book follows one foster child’s journey into care. Though I will rely on the experiences of the foster children I knew, the characters will not be biographical. They will be made up children who share some traits with the foster children I knew, but also have their own backstories and problems. The series will always take place in the same foster home. My grandparents were licensed for six children and always had six children with a diversity of cultural backgrounds and learning abilities and talents. They always referred to their foster family as their rainbow family. Some children came in as toddlers and stayed through adulthood. Others were there for a year or two and then returned to their families. My model will be based on their multicultural home, diverse ages and abilities, and the integration with the extended family as well.

Each book will take on a different child’s life. Right now, I don’t know how many books that will be. It may only be three or four. It may be twenty-three. It depends on how the public likes them and how long I feel I still have important stories to tell. I’m excited for this change. It is a passion project that I finally feel prepared to take on. There aren’t a lot of books talking about foster care in stories, and I hope I can fit into the niche. I want to shine a light on both the difficulties and the triumphs. I hope you will be happy for me as well.