The Promise of the Spring Equinox

Spring is definitely my most favorite time of year. After the darkness of winter, I am always ready for Spring. This year that is especially so. With two years of COVID protocols, a war in Ukraine, still difficult political divisions in the U.S. and across the country an uptick in violence, mental health crises, and it has seemed to be a never-ending dark season.

The promise of Spring has never been more needed for me, and I suspect many others. What is that promise? The first is one of more light and equality. Astronomically, the Earth’s tilt and orbit around the sun aligns its axis neither away from nor toward the sun. This means that no matter which hemisphere you live in on earth, there is 12 hours of light and 12 hours of darkness. Even the earth delivers equality at this time.

Rebirth is also a huge promise of Spring. As the winter is a time where lands lay fallow or all growth is underground where we cannot see, Spring provides evidence that plants come back. Flowers bloom again. Crops that were sowed begin to rise from the soil.

The Butterfly Fulfills the Promise of  Rebirth and Metamorphosis

There is a reason that butterflies and their metamorphosis often serve as a larger metaphor for life in fiction. If I had a spirit animal, it would be the butterfly. I have already seen two butterflies in my garden in the past couple of weeks. For me, the butterfly represents what I often call the unfolding. The changes from egg to caterpillar to pupa and finally adult is miraculous to me. At each stage there is a specific job that keeps the cycle going and maintains the species if it is not interrupted. 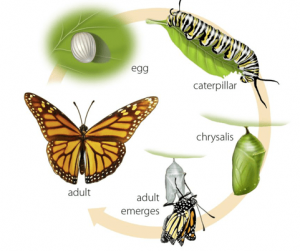 Eggs are layed on the very plants that will become food for the caterpillar that hatches. The caterpillars number one job is to eat and eat and eat. In fact, they eat so much that its skin splits and is shed four or five times as they grow. Food eaten at this time is stored and used later as an adult. When they stop eating is when they become a pupa, wrapped securely inside a nest of silk that the caterpillar spun.

It may look like nothing is going on but big changes are happening inside. Special cells that were present in the larva are now growing rapidly. The short caterpillar legs now become long. The almost unseen eyes become larger, and of course they grow wings to allow them to fly as an adult. Many of the original larva cells provide energy for these growing adult cells. The adult then emerges by literally unfolding from the casing. The adults number one job is to mate and lay eggs. Some species of adult butterflies get energy by feeding on nectar from flowers but many species don’t feed at all. That flying ability is critical as the adult female flies from place to place to find the right plant for her eggs.

Though the average lifespan of a butterfly is about a month, some small butterflies live only a week. Others, like monarchs, can live nine months or more and travel long distances to mate and lay eggs. It is that short span that I see them, from Spring through Summer that is such a celebration of life and a reminder that though the adults die, they have left eggs to live once again.

The coming of Spring or first day of Spring has always invoked celebrations in many religions and cultures throughout history. From a science perspective, the Spring Equinox is when the Earth’s tilt and orbit around the sun aligns its axis neither away from nor toward the sun. This means, when the sun shines directly on the Earth’s equator the length of day and night will be twelve hours in both the Southern and Northern hemispheres. In fact the word “equinox” means equal night. This happens one other time in the year, that is in the fall, often called the autumnal equinox. My second most favorite time of year. Cultures for thousands of years marked this date and time because it provided information for when to plant (Spring) and when to harvest (Fall). 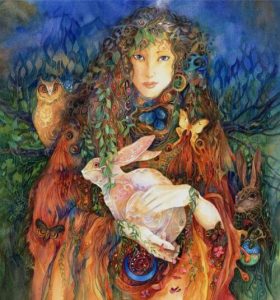 The Pagan tradition celebrates this time as Ostara (also spelled Eostara ). The Spring equinox is represented by the spring Maiden that holds a willow basket of eggs. She brings new life. The egg symbolizes the rebirth of nature, it is the potential of life, full of promise. Oestre, a lunar Goddess of fertility is the root of the word “oestrus”, the time when many animals are fertile. It is also the root of the word estrogen, the hormone stimulating ovulation. In Pagan tradition, the young Sun God now celebrates a sacred marriage with the young Maiden Goddess, who conceives. In nine months, she will again become the Great Mother, sometimes called Gaia. Many believe that the Christian church overlaid this festival with Easter and its theme of rebirth and resurrection from death.

The role of the hare (rabbit) is not so ancient. It appears to be related to the historian Bede who tells a story of the Spring Maiden where a mighty bird pulled her chariot into Spring each year. After some time, she decides to give him rest, and therefore turns the bird into a hare. In return, at the of every spring the hare lays eggs–some even say multi-colored eggs–to thank her for the rest. Some of this goes back to the folk-stories written in the late 1800s related by Grimm.

The celebration of Spring is always a joyful one it seems. I’ve linked several ways other cultures celebrate the coming of spring. Though we may agree around the world to follow the Gregorian Calendar for international travel and time zone synchronization, many cultures celebrate the new year at other times–with a great number of them being at the spring equinox.

Spring Equinox in Teotihuacán – Mexico. Each year, thousands of people, traditionally dressed in white, gather at the enormous Teotihuacán Pyramid, located around 30 miles northeast of Mexico City, to celebrate the spring equinox. Taking place on either the 20th or 21st of March annually, many celebrants use the morning to climb the 360 steps to the top of the Pyramid to get closer to portals of energy. By raising their arms towards the sky and basking in the sun’s warmth, they “soak up” energy for the year.

Songkran Water Festival – Thailand. This annual festival takes place shortly after the spring equinox. Songkran stems from the Sanskrit word for “astrological passage” and is celebrated within Thailand as New Year’s Day. Festivities involve going to a Buddhist monastery, visiting elders, and, of course, throwing water. Locals and tourists alike take to the streets, equipped with cannon-sized water guns, pressure hoses and buckets, ready to drench anyone in their path. Children, adults, and the elderly take part in the tradition, dancing in the streets to loud music.

Holi – Northern India – Undoubtedly one of the most colorful festivals in the world, Holi is celebrated by Hindus across Northern India. It involves throwing colored powder at one another, which pays tribute to the many hues of the spring season as well as events from Hindu mythology. Usually lasting a full day and night, the festival is a gloriously colorful and happy celebration of the end of winter and the spring growing season.

Nowruz – Central Asia. Nowruz means No (new) and rouz (day). Celebrated as the first day of the first month of the Iranian calendar and coinciding with the spring equinox, this “new day” symbolizes new life, new beginnings, and the rebirth of nature. While it differs country to country, the multi-day celebration often starts with people cleaning their homes but quickly escalates into a multi-day festival of bonfires, costumes, and family remembrance, until the 13th day of the New Year when everybody leaves their homes and joins friends and family members outside for music, dancing, and food in the cities’ public spaces.

Cimburijada – Bosnia – Cimburijada, which translates to “Festival of Scrambled Eggs,” celebrates the first day of spring in the Bosnian town of Zenica. At the crack of dawn, people gather by the banks of the Bosna river, where a communal meal of of scrambled eggs is prepared. Together, people share their breakfast eggs with friends, families, and visitors while drinking and listening to music together to mark the first day of spring.

I’m sure there are many more celebrations around the world. These are just a few that I found new to me or different. I was aware of Holi, but the others were all new. It makes me want to think of a special way to celebrate Spring each year with friends and family. Happy Spring!