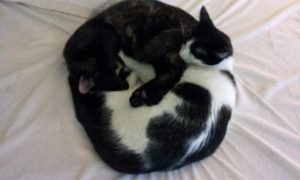 I know there are dog people and cat people, and sometimes they don’t understand each other. I’m an animal lover in general. I’ve had dogs in the past–two beautiful and loving Akitas–and I’ve had cats. Though I love both of them, I find cats to be the easiest for me as I age and as I travel. I currently have two rescue cats, both female. I always adopt rescue animals and highly recommend it.

My cats are Kali and Layla. Kali was found by the cat rescue at six months with a litter of four kittens left in the woods to fend for themselves. Layla was found about a month later as an abandoned kitten (she was probably a month old).  With no mother to feed her or train her, the rescue folks decided to see if Kali would take her and nurse her with her own kittens. As a true loving mother she had no problem fostering Layla. Kali’s kittens were all adopted as soon as they were weaned (cute tuxedo kittens), but Layla was not. She’s a tortie, but mostly black and not seen as cute as the others. Consequently, the two bonded even further after Kali’s kittens were adopted. My husband and I wanted a bonded pair, so we were fortunate to find them and bring them home. 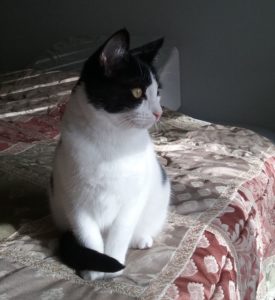 It seems that the majority of writers I know have cats. Is there something magical about cats and writing? I think so. I think it’s that quiet presence that most cats provide–a companion that is willing to sit for hours as you write. I also love their approach to the world. Immense concentration and sometimes manic attention and running to make sure they learn everything about their prey. Kind of like me when I’m in the middle of things–immense concentration on the task at hand, and at times typing so fast I can do 10,000 words in a single day. But then, like my cats, I’m completely spent and exhausted and must sleep.  The one difference is that when they sleep it is for maybe three or four hours and then they are raring to go again. I need a bit more than that. At least five and preferably six hours between immense concentration

They have not gotten to the point of hanging out on my keyboard, as some writers have posted. Instead they hang out on the edge of the bed, just within reach for petting and nuzzling between writing scenes. And when they’ve had enough of watching me write, or napping while I write, they quietly slip out of the room to find some birds or play with toys. Or maybe find my husband for a while. 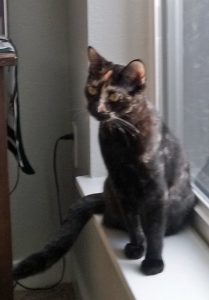 When I’m done for the day, they will snuggle up with me while I watch TV or when I go to bed. And the best part is they are willing to do it all over again the next day and even seem to enjoy it. There’s is not much in the world–human or animal–that is willing to be that quiet companion day after day and hour after hour. That is what is magical about cats.

How about you? Do you have a pet that is constant and loving?

A Return to In-Person Conferences?